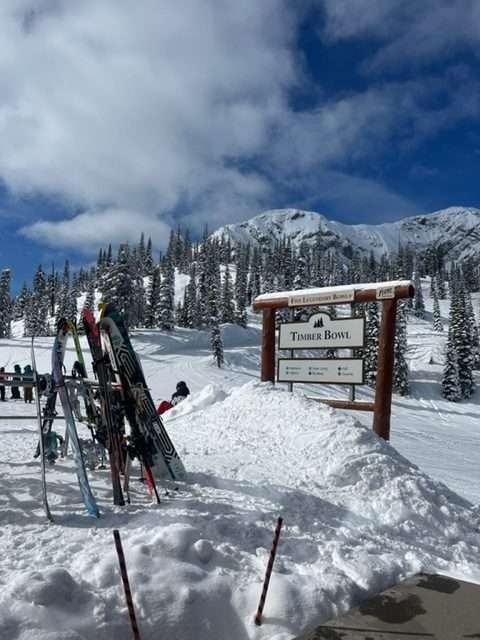 I have little recollection of learning how to ski. Living in a small town south of Montreal we spent our winter weekends doing day trips to the Eastern Townships. I have vague memories of driving through hamlets of majestic homes belonging to the wealthy from Mount Royal. The roof of our Chevrolet laden with five pairs of skis strapped by thick black rubber bands to a flimsy metal frame – tethered to the car by straps that went through the rear windows and cinched tightly together just over our heads. My mother nervously insisting that we check the position of the ski tips looming beyond the windshield after every turn. The thought that they might fly off ever present in her chronically anxious state. They never did.

I have a single memory of my friend Stephen Decker and I attending a Saturday morning ski lesson taught by a mundane anglophone. Our toes and fingers throbbing as we fidgeted on the cold mountain slope while the instructor droned on about unweighting and doing the stem christie. Stephen had convinced me that turning was for sissy’s because it just slowed you down. The technicals of skiing were wasted on us as we broke free and headed full speed straight down the hill.,

My mother’s role in our skiing family was to provide lunch. I have no recollection of ever skiing with her or seeing her ski. There is a single picture of the five of us on skis standing in front of the main lodge. She looks miserable.

Mom would start getting the lunch organized on Friday night — making the fillings of egg and tuna salad. Early Saturday morning she would lay out a loaf of white bread in two straight lines, put a scant layer of margarine on one slice and a generous dollop of filling on top of it. Covering it with the other piece of bread she would tuck in the filling bursting from the sides, cut it in half, more filling bursting, and wrap two sandwiches at a time in wax paper. By the time we had them at lunch they were soggy and stuck together. We were too cold and hungry to mind. A thermos of hot chocolate for my brothers and I, tepid and skimpy on the chocolate and one of coffee for my parents rounded out our picnic lunch.

I was too little to ski with my brothers (not my words) so I skied with Stephen and sometimes my friend Devon. On one occasion I remember my father deciding it was time to take me to the hill where the boys (my brothers) skied. My eight year old mind registered a steep, endless, and bumpy ski run. I was getting ready to take my skiing badge for Brownies and Dad had decided I needed some pointers. I’m sure I was crying as he coaxed me across the hill and then would yell turn, over and over and over again. He convinced me that there was nothing I couldn’t ski. Devon and I went on to get our advanced ski badges later that season. While style is often lacking, the fearless confidence is a gift from father to daughter.

I stopped skiing when we moved from Montreal to Toronto. A trip to the ridge they called a mountain north of the city with my father in my early teens had me scorning and clumsy – clearly dismissing the experience as a waste of time.  My brothers continued to ski, I was still “too little.”

I came back to skiing as the parent of three children. Determined that our family would not be split by a sole hockey player, gymnast or figure skater, it was decided we would be a skiing family. One of my older colleagues had shared that skiing had kept him close to his sons. It seemed they always turned up to join him in the mountains. I worked with this man for ten years and that was the best advice he ever gave me.

Unlike my family of origin, we skied as a single unit.  Years ago, exiting the chairlift with a headwind so strong our youngest couldn’t pole down the ramp, I pushed him until he was even with his sisters, and we all headed down the run. Our motto, especially in the bigger mountains, was stay together. Always have eyes on the person in front of you. First to the bottom stops and wait for the others.

Our family lives still manage to intersect on occasional winter weekends. And on other weekends and holidays we have a community of late-stage skiers that still want to play in the snow and conquer mountains. The tether to a life long shared sport is strong and unrelenting.